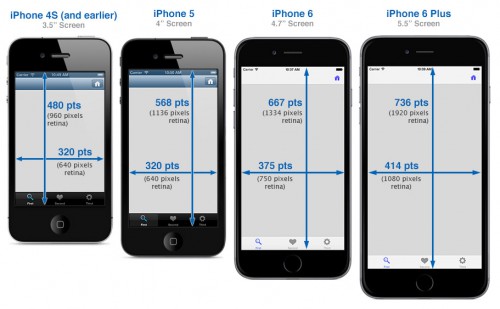 How to detect the current device size and kind

Other dimensions common to all screen sizes:

Apple introduced retina displays starting with the iPhone 4. You don’t have to modify your code to support high-res displays; the iOS coordinate system uses points rather than pixels, so the dimensions and position in points of all UI elements remains the same across all devices.

iOS supports high resolution displays via the scale property on UIScreen, UIView, UIImage, and CALayer classes. If you load an image from a file whose name includes the @2x modifier, its scale property is set to 2.0. Similarly an image with a @3x modifier has a scale of 3.0. Otherwise the scale defaults to 1.0.

To refer to an image in your code (or in Interface Builder), use the filename of the standard sized image. iOS will automatically detect and use the @2x version if the device supports it: